American Indians occupied the lands that would later become the United States, but they did so as tribes and not as individual owners. The land that is now Missouri was explored and controlled by first the French (1673-1762), then the Spanish (1762-1800), briefly the French again during Retrocession (1800-1803), and then it was sold to the United States as part of the Louisiana Purchase. The United States government recognized, in some ways, the original rights of American Indians by entering into treaties to purchase lands and also by removing the tribes by force when agreements could not be reached peacefully. What would become Missouri was the first place in the young country where the tribes were required to relinquish all land and vacate for American settlers. William Clark played an essential role in facilitating this relinquishment of land.

Before the expansion into Missouri and other western territories, the United States government created the  Rectangular Survey System to allow for the sale of public lands in a systematic way. This system used baselines and meridians to divide land into townships and sections that could more easily be sold and transferred. Missouri, and eleven other states, use the Fifth Principal Meridian as a delineating point of reference. Source: A History of the Rectangular Survey System, U.S. Department of the Interior, Bureau of Land Management.

“Be it ordained by the United States in Congress assembled, that the territory ceded by individual states to the United States, which had been purchased of the Indian inhabitants, shall be disposed of in the following manner: “A surveyor from each state shall be appointed by Congress........" From May 20, 1785. An ordinance for ascertaining the mode of disposing of lands in the Western Territory

The BLM’s Cadastral Survey Program provides one of the oldest and most fundamental functions of the U.S. Government.  Originating with the Land Ordinance of 1785, cadastral surveys create, define, mark, and re-establish the boundaries and subdivisions of the public lands of the United States.  (The word "cadastral" is derived from cadastre, meaning a public record, survey, or map of the value, extent, and ownership of land as a basis of taxation.)   Source: Bureau of Land Management , Department of the Interior 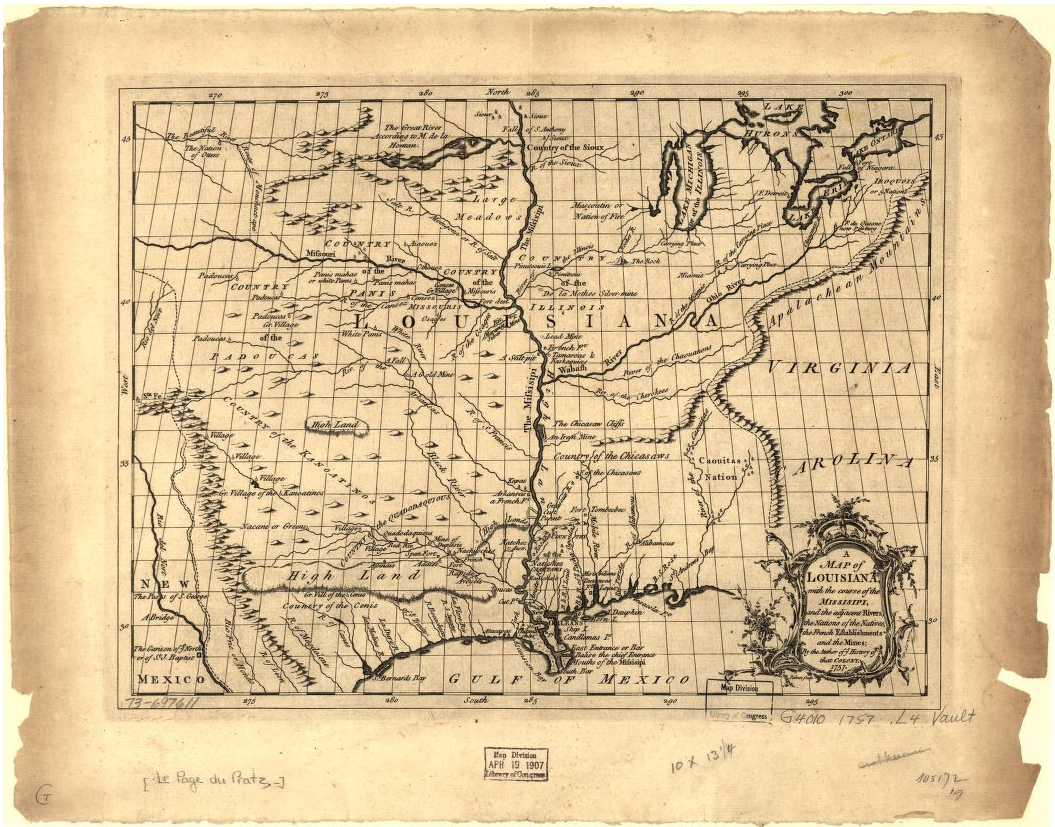 Image: Le Page du Pratz, contributor. A map of Louisiana, with the course of the Missisipi, and the adjacent rivers, the nations of the natives, the French establishments and the mines; by the author of ye History of that colony. 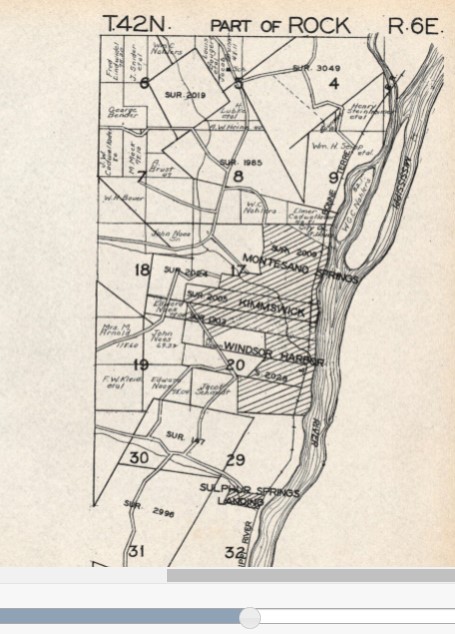 On June 4, 1812, 2 Stat. 743 Congress passed the act creating the Missouri Territory which was basically a name change. The new territory included all the lands in the original Louisiana Purchase of 1803, minus the new State of Louisiana. 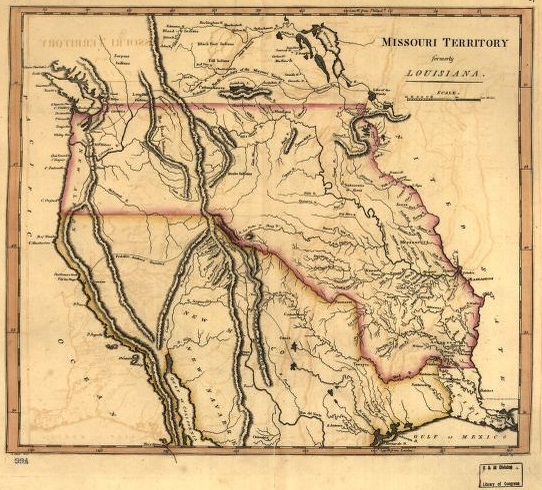 The Meridians of the US Survey System control the surveys of lands within certain areas. The establishment of the Fifth Principal Meridian on November 10, 1815 marked the point at which all rectangular surveys in Arkansas, Missouri, Iowa, North Dakota, most of Minnesota and half of South Dakota are based. 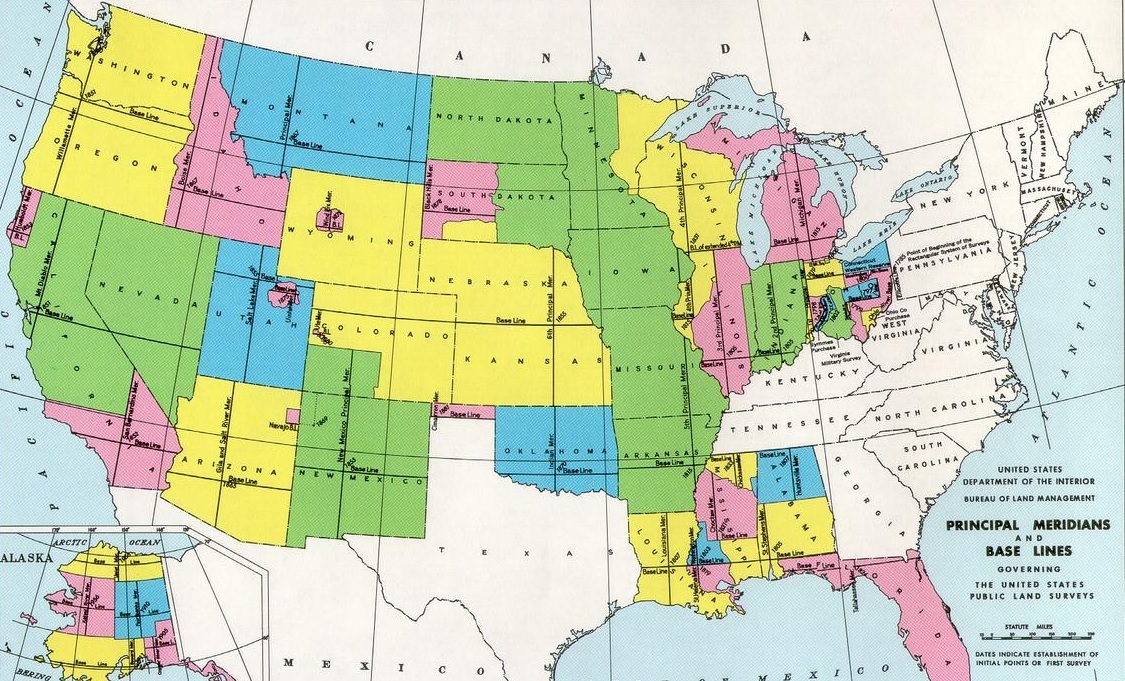 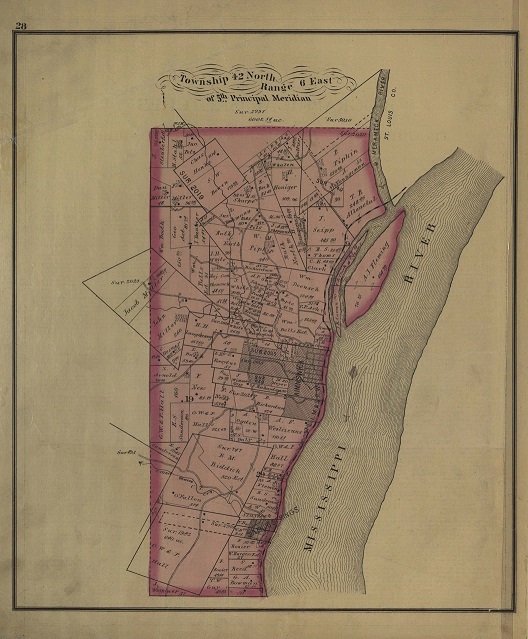 "The Public Land Survey System (PLSS) was created by the enactment of the Land Ordinance of 1785 and the Northwest Ordinance of 1787. These two ordinances provided for the systematic survey and monumentation of public domain lands with the intent of transferring these lands to private citizens through sale. To this day the PLSS forms the basis for the delineation of lands and transfer of ownership in Missouri (The Public Land Survey System (PLSS), 2009). The system as laid out in the laws called for a rectangular system of Townships six (6) miles square arranged in a grid of ranges and divided up into 36 sections of 640 acres each. The Township and Range lines were to be surveyed first and the Townships divided up into section starting in the south east corner." Missouri Department of Natural Resources 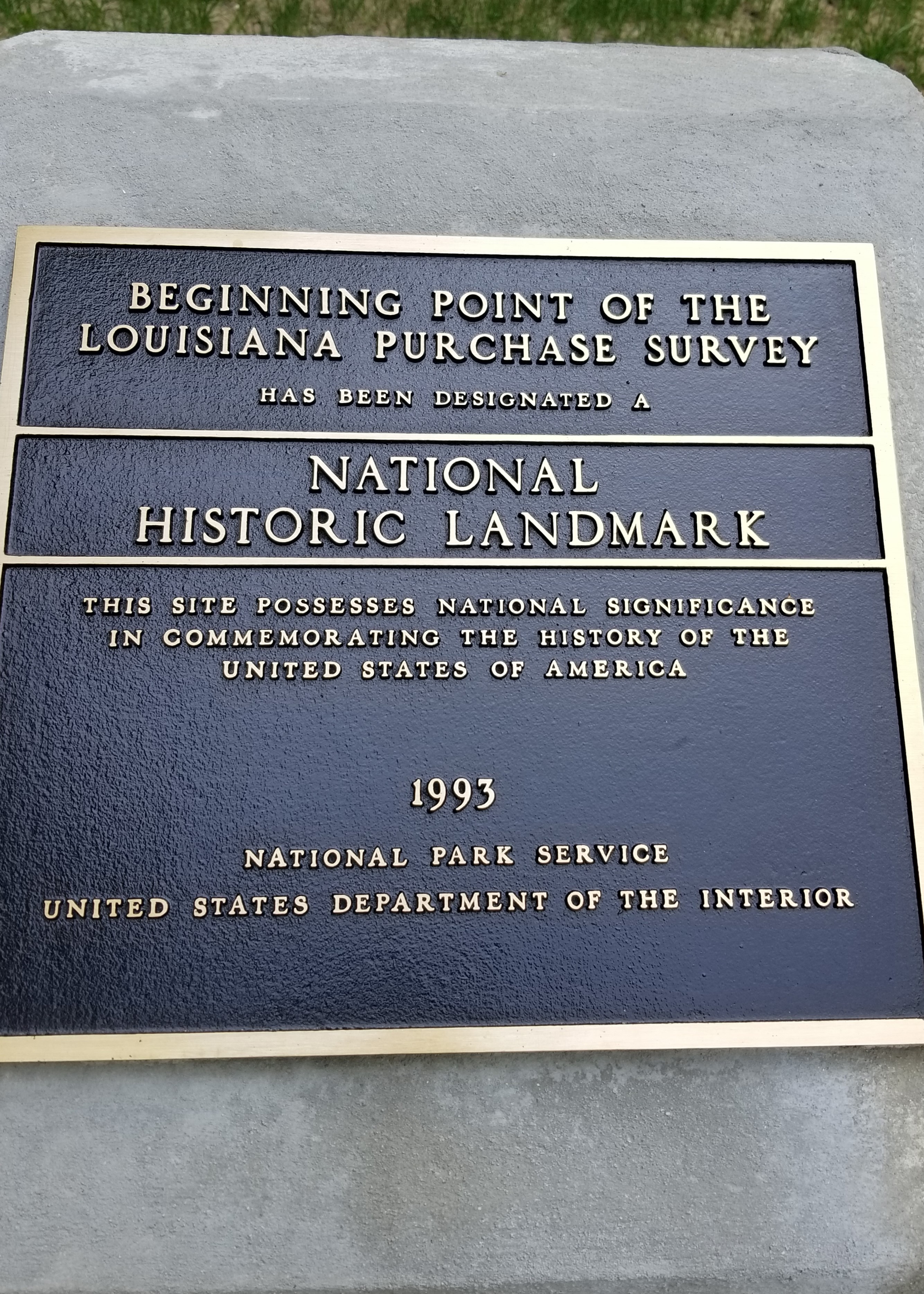 The starting point for the 1815 Survey of the Louisiana Purchase was in a cypress swamp in Monroe County, Arkansas. Assistant Director of Library Services & Coordinator of the Jefferson County History Center, Joette Klein, paid a visit to this area of special significance to Missouri statehood and the eventual surveying and sale of public lands in eleven states.  This area became a National Historic Landmark in 1963. Photo Credit: Joette Klein, Jefferson College Library, 2021. 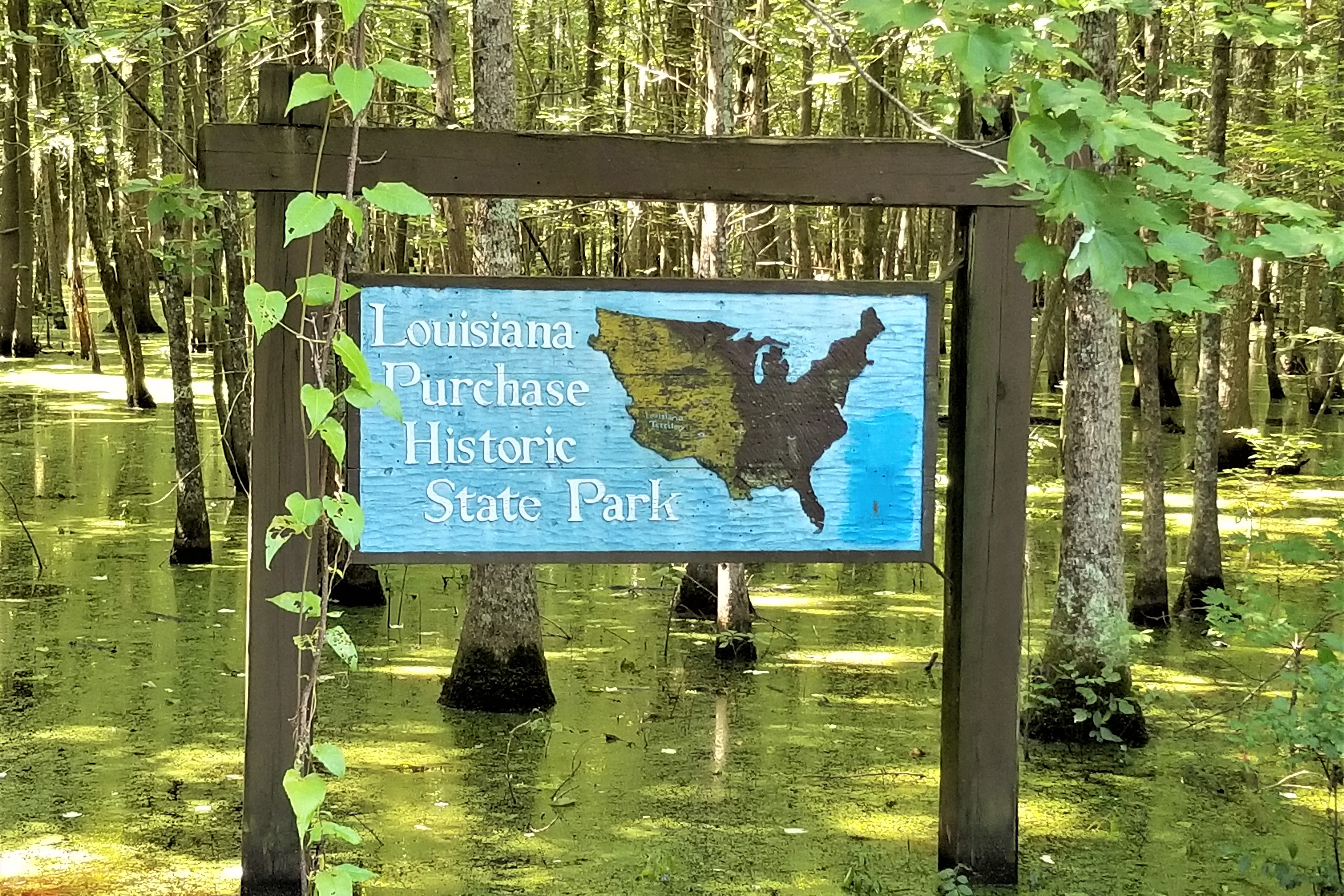 "On October 27, 1815, Deputy Surveyor Joseph C. Brown began the survey of the baseline at the confluence of the Mississippi and St. Francis Rivers and ran it due west. On the same date, Prospect C. Robbins began the survey of the meridian at the confluence of the Arkansas and Mississippi Rivers and ran it due north. Robbins intersected the baseline in the 58th mile, approximately 26 miles west of the Mississippi River, on November 10,1815. There he established the initial point of the Fifth Principal Meridian, which controls the rectangular surveys in all of Arkansas, Missouri, Iowa, North Dakota, and in most of Minnesota and half of South Dakota." From A History of the Rectangular Survey System U.S. Department of the Interior, Bureau of Land Management. Photo Credit: Joette Klein, Jefferson College Library, 2021. 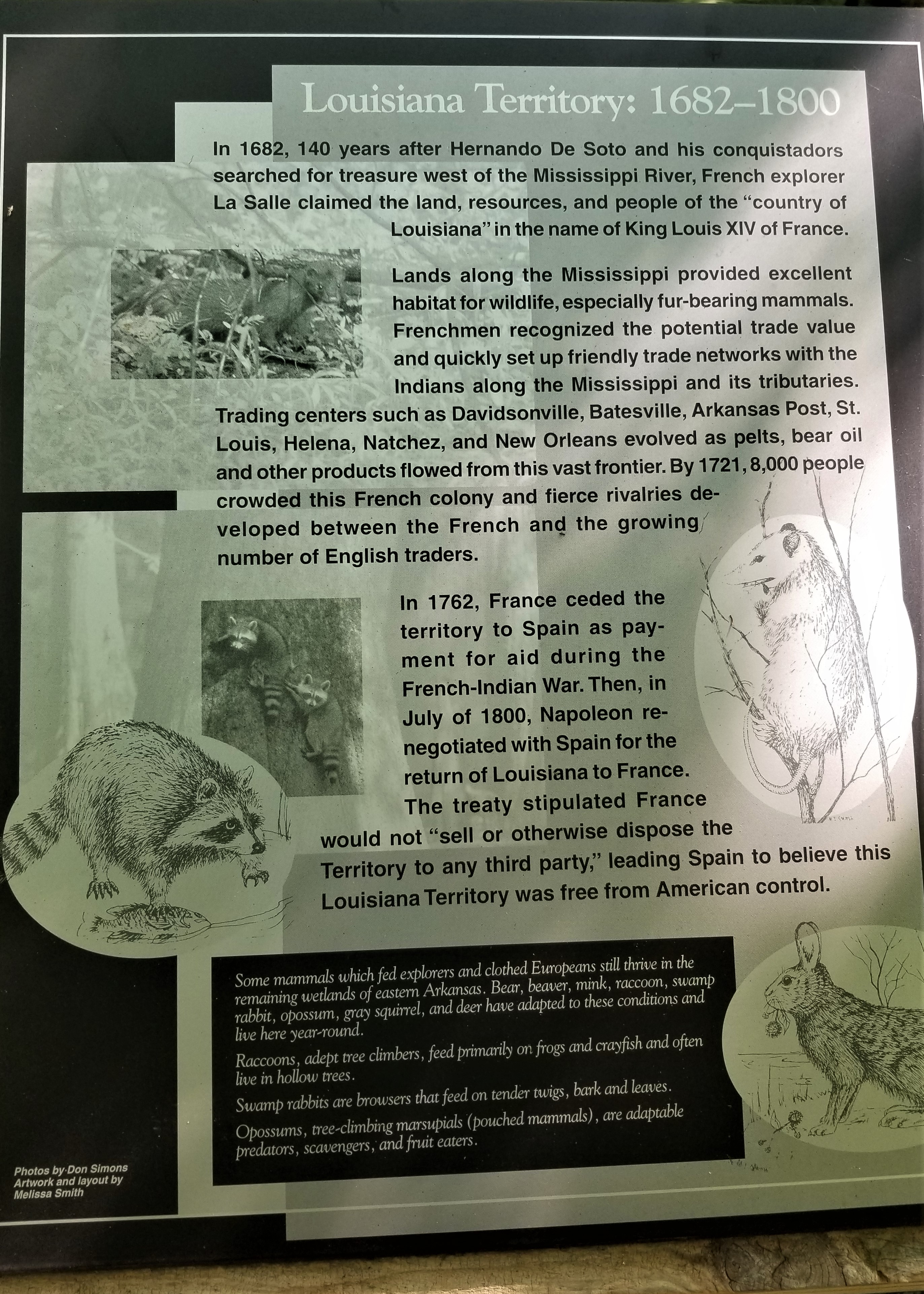 In 1682 French explorer La Salle claimed the land, resources, and people of the "Country of Louisiana" in the name of King Louis XIV of France.  France maintained control of the land until 1762 when they gave the land to Spain as payment for aid during the French-Indian War.  Napoleon renegotiated with Spain in 1800 for return of the land to France under a treaty stating that France would "not sell or otherwise dispose of the Territory to any third party". Photo Credit: Joette Klein, Jefferson College Library, 2021.

In 1801 President Thomas Jefferson learned of the land being returned to France.  He sent an ambassador to Paris with instructions to inform France that the United States would not tolerate the loss of the Mississippi River trade outlet.  In 1802, With Napoleon readying to occupy the port of  New Orleans with military troops, Jefferson sent James Monroe to Paris with permission to purchase the port of New Orleans and West Florida.   By 1803 a peaceful settlement with France seemed unlikely.  On April 11, 1803 Napoleon announced he would sell the entire territory to the United States and by  April 30th, 1803 a treaty was signed allowing the United States to purchase 830,000 acres for $15 million. Photo Credit: Joette Klein, Jefferson College Library, 2021. 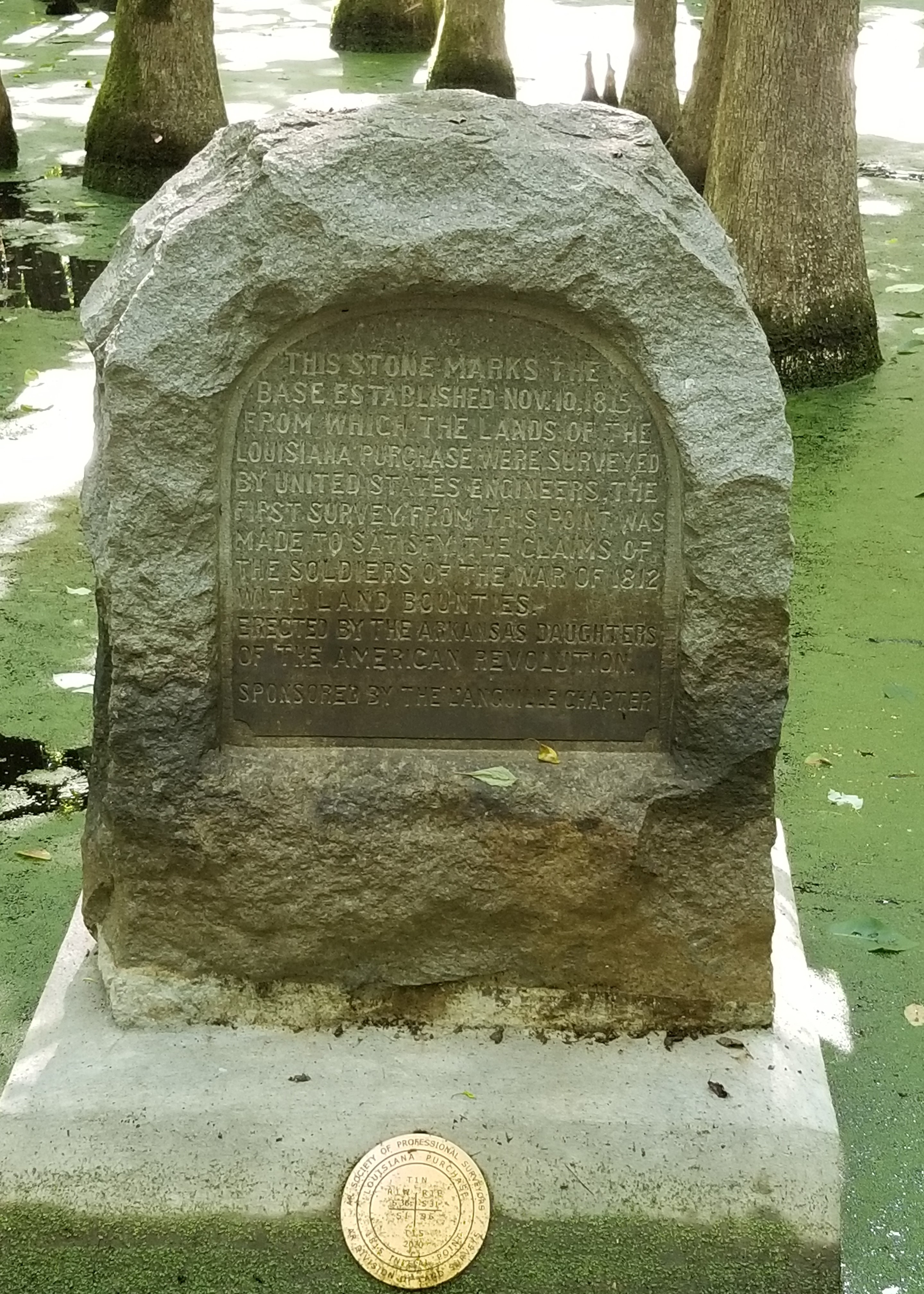 "Existing law requires that in general the public lands of the United States “shall be divided by north and south lines run according to the true meridian, and by others crossing them at right angles so as to form townships six miles square,” and that the corners of the townships thus surveyed “must be marked with progressive numbers from the beginning.” -18- Also, that the townships shall be subdivided into thirty-six sections, each of which shall contain six hundred and forty acres, as nearly as may be, by a system of two sets of parallel lines, one governed by true meridians and the other by parallels of latitude, the latter intersecting the former at right angles, at intervals of a mile." Source: A History of the Rectangular Survey System U.S. Department of the Interior, Bureau of Land Management. 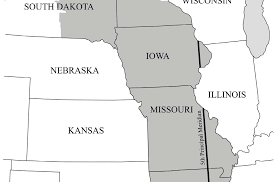 "The United States Public Land Survey System (USPLSS) in Missouri is an extension of the system adopted by the United States Congress in 1785. Between 1815 and 1855, Missouri was surveyed into one mile squares called sections. This created the basis for the transfer of land from the U.S. Government to private owners and continues to be the basis for all land transfers and ownership in the state today.

Cadastral Surveys restore existing and obliterated corners of the United States Public Land Survey System. Hundreds of corners are restored, thousands perpetuated and documented through in-house projects, contracting and participation in the filing of Certified Land Corner Documents. Geodetic Surveys define and manage a consistent coordinate system based on latitude, longitude and heights throughout Missouri. Baselines throughout the state validate and verify electronic distance measuring equipment."

"This act extends the authority of the Surveyor General to include the entire Territory of Louisiana and states....Mansfield recommended and finally appointed Silas Bent to be Principal Deputy in the Louisiana Territory, now comprised of Missouri and Arkansas, and other States. Bent established his office in St. Louis; in the ensuing years he had great difficulty with the land commissioners and the private land claim surveys." From A History of the Rectangular Survey System, U.S. Department of the Interior, Bureau of Land Management.

The Louisana Purchase, an Arkansas Swamp & the Fifth Principal Meridian

“With the 1803 Louisiana Purchase America acquired some 830,000 square miles of public land, doubling the size of our country….The Act of May 6, 1812, 2 Stat. 728, addressed this problem and states: That the President of the United States be, and he is hereby authorized to cause to be surveyed a quantity of the public lands of the United States, fit for cultivation, not otherwise appropriated, and to which Indian title is extinguished….This location, the Initial Point for the 5th P.M. was in the middle of a cypress swamp. What a historic event and place! All land parcels in Arkansas, Missouri, Iowa, North Dakota, and parts of South Dakota and Minnesota are referenced by township and range to this point. It references more land area than any other Initial Point in the United States Public Land Survey System.” 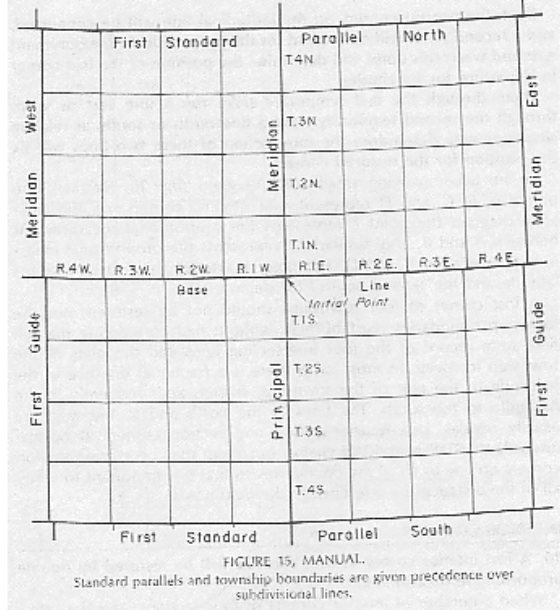 "The plats of each township were to be divided into 36 lots, now called sections, with number one in the south- east corner of a full township and number 36 in the northwest corner. The interior lines of the townships were not surveyed on the ground, only protracted on the plat...The Surveyors are to keep detailed field notes (vital for mapping in- formation) and return them to the Surveyor General for permanent records. The Surveyor General will make three plats; one for his office, one for use at the place of sale, and one for the Secretary of Treasury; he will make out a description of the township for the use of the officers making sales, and will give a description on the plat of the lands and the corner monumentation. Source: The History of Rectangular Survey System Bureau of Land Management, U.S. Department of the Interior. Image Source: Restoration of Lost or Obliterated Corners and Subdivision of Sections, Bureau of Land Management, U.S. Department of the Interior.